A look behind the scenes - Part 1

Product development is not always a linear path, often requirements and technical possibilities change during the development process. After the successful introduction of Model M1, our second loudspeaker Model M2 was to follow at a short distance. Due to the lively feedback at trade fairs and events, we have therefore decided to make several adjustments.

The initial concept was to scale Model M1 by about 50 percent, using the same successful ideas and strategies and adding more level and depth. 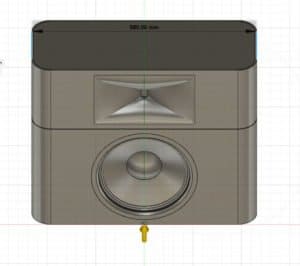 For this purpose the three 17 cm/6″ bass-midrange drivers were replaced by two 25 cm/10″ drivers (front and rear). Due to the larger and now ventilated (bass reflex) cabinet, a third driver at the rear could be dispensed with, as there was now sufficient level available.

After building a prototype - in the automotive industry it would have been called a study - we and some visitors of the Westdeutsche HiFi-Tage(photo by Holger Barske) didn't like the massive width of the cabinet (58 cm) as much as the drawings suggested.

As a consequence of these impressions we decided to keep the basic proportions, especially the flat construction and to extend it into a floorstanding speaker. Maintaining the acoustic performance always had priority. In fact, the tuning could be easily transferred and adapted to the new dimensions of the baffle.

You know this stand from the pictures shown so far on our website.

We used the pause in production and distribution caused by the Corona virus to think further about Model M2. In this third iteration we decided to use the rear woofer not only (as in Model M1) to create the cardioid radiation pattern, but also to implement other modes. This was also possible because the format of the floorstander allowed us to move the rear driver vertically downwards and thus further away from the front driver, which in turn allows for a more even room excitation in the bass range.

For further operating modes it was necessary to generate more energy (sound pressure) in the back of the speaker, which is why we replaced the rear 25 cm/10″ woofer by a 30 cm/12″ driver and placed it in its own ventilated chamber. The front 25 cm/10″ driver, on the other hand, got its own closed chamber, which offers advantages especially for the midrange.

In a stereo pair, the four drivers can act like four subwoofers and, if necessary, specifically cancel out room modes. We are convinced that it was worthwhile to use this potential, even if this will prolong the development.

In the next part we will report on the components used, especially the drivers and the reasons for their use. This will give you an insight into the development on the way to a finished product.

The completion of Model M2 is now planned for autumn 2020. If the relevant trade fairs can resume operations by then, there will certainly be an opportunity to hear Model M2 live there as well

Get the latest news from us direct to your mailbox

Get early access to new products, exclusive offers and events in your area.

This form transmits your e-mail, so that we can send you the requested information. You can cancel the subscription at any time. In our Privacy policy learn more about this.

As a manufacturer, we trust in evidence-based design and offer recording studios, home theaters and audiophile private users authentic reproduction and the unforgettable "you-are-there" effect.

As a manufacturer, we trust in evidence-based design and offer recording studios, home theaters and audiophile private users authentic reproduction and the unforgettable "you-are-there" effect.